Yes, it’s Sunday snog time again over at blissekiss.co.uk, and I’m joining in with a sneak excerpt from my new Totally Bound release, Maestro. It’s part of the Paramour Valentine’s collection, four stories involving older women involved with dominant younger men (and you can’t go wrong with a combination like that…) and is set behind the scenes of a major London opera company. Costume designer Jax has been tasked with creating designs for the opera Perpetua, in particular, the eye-catching outfits that will be worn by hot Canadian tenor, Kieran Vale. There’s a spark between Jax and Kieran that she can’t deny, but she’s afraid of acting on the attraction. Kieran, however, recognises her submissive tendencies and is more than happy to act on them, but first comes the kissing part: 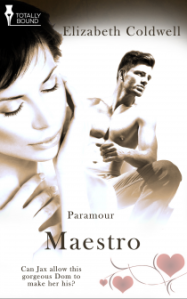 Kieran pulled me into an embrace, and we kissed. The taste of his mouth was sweet against mine, with the slightest lingering flavour of olive oil. My body melted against his, and as he moved his kisses in a soft trail down my neck, heading towards my collarbone, I let him unbutton my blouse and push it from my shoulders. In response, I pulled his navy polo shirt out of the waistband of his trousers. I traced the flat, warm planes of his abdomen with my fingertips. He growled softly in response.

“I’m going to have to do something about those wandering hands of yours,” he murmured.

Almost without my being aware of it, he manoeuvred me backwards until the backs of my legs bumped against the edge of the bed. I didn’t resist, just allowed him to push me till I fell back on the soft towel.

He clambered on to the bed beside me, and pulled a couple of lengths of material from his bedside drawer. He wrapped the end of one of them around my left wrist and I registered the feel of silk. Then he used the scarf to secure my arm to the wrought-iron framework at the head of the bed. Working quickly, he repeated the process with my other wrist, tying the knots tight enough that I wouldn’t be able to wriggle out of my bonds, but not tight enough to endanger my circulation. Having secured me in place, he took one of the big, down pillows and arranged it under the small of my back, tipping my hips up towards him.

With a lazy smile down at my bound body, seemingly confident that I wouldn’t be going anywhere for a while, Kieran began to undress. He took a frustratingly long time to strip down to his white trunk-style underwear with the designer’s name emblazoned on the waistband. All I could do was lay there, wondering what he might be about to do next.

He answered me by crouching over my body and planting soft kisses on my lips and the hollow at the base of my throat. He ran his hands over my skin, stroking and teasing, lulling me into a dreamy, relaxed state. I closed my eyes, and sighed in bliss. I’d never felt so deliciously passive, having surrendered control of my pleasure to Kieran.
His next move jolted me back to the moment. With ruthless tugs, he pulled the cups of my bra down, baring my breasts. Being half-exposed like this seemed altogether more brazen than if he’d removed the bra entirely, and his grin told me how much he liked the way I looked.

Kieran latched his lips onto my nipple, suckling and sending jolts of sensation down to my pussy. I needed more, needed to feel his mouth between my legs, but he was setting the pace here. I knew I would get the orgasm I so badly craved, but purely on his terms.

You can find out what happens next by getting hold of Maestro, which is available for early download from Totally Bound. And don’t forget to check out the Sunday Snog and see which other authors are sharing a sizzling kiss or two…

2 thoughts on “A Sneak Peek Snog From Maestro”