Christmas has come early! From now until Sunday, Love Under The Mistletoe is free to download on Amazon Kindle.

This five-star rated anthology contains four sensual tales set over the Christmas period – Snowed In by Alice Raine, The Sharpness of Holly by Demelza Hart, A Valentine for Christmas by K D Grace and my own Christmas for One. It’s guaranteed to warm you up on a cold day.

You can pick up a copy at Amazon US and Amazon UK.

…talking about Christmas For One, my story in the Cariad Love Under The Mistletoe collection and why men in Santa suits are sexy. Follow this link to find out more.

Rounding off this four-day Naughty Corner special to celebrate the release of the Xcite Cariad Love Under The Mistletoe collection, my guest today is Demelza Hart, author of the deliciously rude Suited To You trilogy. She’s talking about her story, The Sharpness of Holly.

Thanks for having me over, Liz. It’s great to be here and really helping me get into the Christmas spirit! 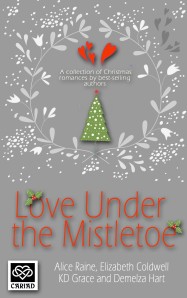 You can choose your friends, but you can’t choose your family. So said an aunt of mine one year after another argument with my mother. And it was Christmas. Of course it was Christmas. It’s strange, isn’t it? We so look forward to Christmas and associate the arrival of family as something nostalgically wonderful which is sure to be great, but it invariably goes horribly wrong. There are disagreements about how to cook the turkey. Or the sprouts. Or the pudding. There’s that moment when you find every single person present has bought everyone else the Downton Abbey companion book. There’s the bratty child who hates all her toys even though the whole of Hamleys has been bought for her. There’s the uncle who drinks too much and approaches Monopoly like he’s Alan Sugar. There’s the silent teenager who may well poison everyone with the Buck’s Fizz he’s been lurking beside. There are the two aunts who have to bring up that incident twenty three years earlier which everyone has been trying so hard to forget since.

The Family Christmas. It can take a whole year to get over it and for wounds to heal, but the following year we do it all again. Alcohol helps, of course.

Holly Merchant, the eponymous character in my story, The Sharpness of Holly, the final story in the Love under the Mistletoe anthology, has an ambivalent view of her family and their ritual Christmas gathering in an aunt’s large country house. On the one hand, she can’t stand any of them and wishes she was as far away as possible. On the other, she loves to tuck herself somewhere out of sight and spy on their strange personalities and interactions. This year for Holly things are a bit different. Her sister, Rosa (the pretty one, as she is always reminded), from whom she’s grown apart since childhood, is coming for Christmas for the first time in years. And she’s bringing a man. The prickly Holly doesn’t do men (or women, as her sister often tells people) and the thought of the family simpering over Rosa’s new boyfriend, Daniel – sure to be as dull as all the others – turns her stomach.

But when Daniel arrives, he isn’t dull or boring. Enigmatic, intense and sardonically witty, Daniel is like no other boyfriend Rosa has ever brought along before. In fact, despite trying hard to hate him, Holly finds him fascinating and undeniably attractive. And when Daniel starts to pay more attention to her than to her sister, Holly struggles to keep her normally controlled feelings in check. But how will these new desires and experiences play out against the backdrop of her mad family’s Christmas?

I loved writing this story. It has all my favourite elements: a dark, brooding man; a feisty young heroine, inexperienced but keen to learn; a touch of the illicit; a large country house with plenty of dark corners for dark secrets; and a cold, star-canopied walk home along country lanes after Midnight Mass! All the right ingredients for a Christmas romance. Oh the weather outside is frightful, but, trust me, the heat between Holly and Daniel is so delightful.

Holly liked being unseen; she liked tormenting them; she liked teasing them with her absence so much that they would become rigid with frustration. The family needed a thorn in their side.

So she hid. It had been a long time already. There was a long curtain in the dining room in front of a high window. If she stood absolutely still she could hide easily in the folds.

She could hear bored voices calling for her to come out. But she stayed there, enjoying the muffled, enclosed space, dark and cosseting and warm. She listened intently. Were those footsteps approaching? No. Nobody could be that quiet. It must have been the floorboards settling. She pressed herself against the window and held her breath, turning away and squeezing her eyes shut. She felt inexplicably excited, like she had as a child.

Suddenly, from nowhere, a hand was placed over her mouth. She tried to scream but any sound was muffled against the large palm. At the same time another hand held her arm remarkably tightly.

‘I seem to have found you,’ said a voice.

She struggled, trying to break free but unable to. The hold on her was too tight. Her anger at her discovery was heightened by the electrifying frustration of being constrained.

‘I’d advise you to stop struggling. I’m not going to let go of you so there’s no point. I want to turn you around but you’re not to make a sound, do you understand? That would spoil the game.’

Holly felt like kicking back, hurting him, but she found herself instead acquiescing. She nodded, and she was turned around to face her captor.

She looked into the shadows at Daniel’s beautiful face. He was fixing her with that same intense gaze. His hand was still clamped over her mouth.

She tried wriggling to escape again, but only half-heartedly this time, testing him almost, to see how he would react. She had her answer when, with leopard-like fluidity, he moved her arms behind her back and pinned them to her with his hand encircling both her wrists. It resulted in her full length being pressed hard and flush against him.

Her insides threatened to leap out of her. Her heart was pounding. As much as she hated him for managing to capture her like this, she was dizzy with excitement. She adored the lean hardness of him and did nothing to shy away from the contact. He was still staring into her, his gaze only a flicker away. ‘I told you to be quiet,’ he murmured. She watched his mouth as he spoke, the way his lips curled slightly, his neat white teeth, the quick flicker of the tip of his tongue. The heavy seep between her legs was betraying her and she pressed her thighs together to relieve it. He smirked.

She gave a slight nod. He was; her arms were pulled tight and it was giving her pins and needles, but she found she didn’t really mind.

Her affirmation didn’t seem to bother him. He didn’t apologise nor did he relax his hold. In fact, he seemed to pull her in even harder.

He was breathing as heavily as her. ‘If I release your mouth, you must promise me you won’t make a noise. Do you promise?’

She nodded again. Slowly, she felt the tightness of warm skin across her lips relaxing. His palm was within her reach. She had half a desire to lick it, half to bite it.

An irritated voice sounded suddenly in the room. ‘Where’s Holly? For God’s sake, you’d have thought she’d have given up by now.’

Daniel didn’t release his grip on her arms. Her eyes widened as she heard her sister just on the other side of the curtain, but she couldn’t move, neither did she want to. Daniel was tormenting her. His breath was so close it hushed over her cheek.

He didn’t say anymore, but as her sister searched the room beyond, he moved in closer and closer, bending his head to hers. She wanted it so much she could scream. Closer.

‘Holly?’ called Rosa from the other side of the curtain. ‘This is bloody tedious now, you know.’

Closer. That perfect mocking mouth. His lips met hers.

I hope you and enjoy this and the other fabulous stories in this festive anthology. Come and join me elsewhere: On Facebook

And at my blog

Christmas is coming closer than we’d all like to think (don’t worry, I’m not one of those uber-organised types who starts my shopping the moment the January sales kick in) and what better way to celebrate the festive season than to snuggle up with a hot romance?

Love Under The Mistletoe is a collection of four sizzling seasonal tales from some of Xcite and Cariad’s best-selling authors. Here’s a taste of what to expect:

Christmas For One – Elizabeth Coldwell

A jilted bride discovers just how exciting the single life can be when she goes on her honeymoon alone, and finds herself the object of affection in Hawaii.

Housecleaner Allie unexpectedly finds herself snowed in with a mysterious man with a secret he refuses to share, and with only each other as company, attraction sparks between them…

The Sharpness of Holly – Demelza Hart

A family Christmas reunites Holly with her estranged sister and her new boyfriend Daniel – but when sparks fly between Holly and the taken older man, can she resist temptation or will it prove a Christmas to be remembered?

A Valentine For Christmas – KD Grace

Love Under The Mistletoe will be released in early December, but it’s available to pre-order from Amazon now. Click on the cover to find out more, and start getting ready for a sexy, sensuous Christmas treat.