All publishing houses have their own ways of promoting themselves, but how many would produce and send a teeshirt to all their authors? That’s what Tirgearr did with their Team Tirgearryan shirts, and here I am, modelling mine on the picturesque (and rather windy) Brouwersgracht in Amsterdam. 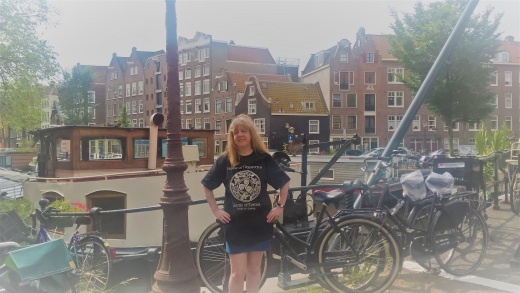 As you can probably tell, the teeshirt design is a nod to Game of Thrones, though sadly the lovely Kemberlee at Tirgearr hasn’t yet provided us all with our own dragon…

If you’d like your own House of Tirgearryen teeshirt, they’re available to buy on the Tirgearr website. And as an added bonus for lovers of the Tirgearr City Nights series (including my own One Night In Brussels), all the books are part of the Tirgearr store-wide sale at Smashwords from now until the end of July. To start shopping, click on the banner below, then use the code SSW50 at the checkout to receive your discount. Gelukkig lezen! (That’s Dutch for ‘happy reading’.)

If you’re looking to stock up on holiday reading, here’s something that will help you load up your e-reader. Tirgearr are having a sale at Smashwords throughout July, and you can get 50 per cent off all their titles. This includes the City Nights erotic romance series, so if you’re travelling to New York, Madrid, Dublin, Amsterdam, San Francisco or Barcelona, to name only a few, you can enjoy a story that’ll give you the authentic flavour of a city combined with some hot and sensual sex. Or you could try my contribution to the series, One Night in Brussels, and discover there’s more to Belgium than an under-achieving football team. (Too soon?)

All the details of this offer are on the banner below – click on it to be taken straight to the Smashwords site.

…and to celebrate, they’re throwing a Big Birthday Bash. Loads of great titles will be on sale for just 99p/99c, including my own hot romance novella, One Night In Brussels. There are too many authors taking part for me to name, but fortunately the lovely graphic below is around to do it for me. Click on the image to go to the Tirgearr site and find out more.

From tomorrow, catch me on tour, talking about my Tirgearr hot romance novella, One Night In Brussels. I’ll also have a prize giveaway, so don’t forget to enter that – details will be available on each of the tour stops.

Here’s where you’ll be able to find me:

Here’s a snog with a continental flavour, from One Night In Brussels, a hot romantic suspense tale that’s now available from Tirgearr Publishing.

Saskia has bunked off from her boring job at the European Commission to spend the afternoon with businessman Dominic. After an incident in a jeweller’s shop she’s starting to believe he’s not all he seems, but in his plush hotel room things are about to become more intimate between them.

He comes to sit beside her, so close his thigh rests against her own. Even through the layers of clothing, she can feel the heat his body gives off. Her pulse has quickened and her nipples are tight knots against the cups of her bra.

“Look, about the necklace…” Dominic begins, but Saskia doesn’t want to hear another word on the matter. Their faces are a matter of inches apart, and her focus is solely on those soft lips of his. He must be aware she isn’t listening to what he’s trying to tell her, because he takes one big gulp from his glass before setting it on the nightstand.

“Like I said,” he goes on, “this is an adventure, and I want you to enjoy it.” He takes the point of her chin in his hand, and runs his thumb over her pouting lips. The motion is gentle, hypnotic, and Saskia lets her mouth fall open a little further.

As far as she’s concerned, he doesn’t need to ask her permission to go further, but she gives it anyway. She nods then lets her tongue flicker over the pad of his thumb. Her gaze meets his, and the depth of the desire she sees there causes her heart to skip a beat.

Dominic takes the glass from her hand, placing it beside his own. He plants a kiss by the corner of her mouth, as if testing the waters, and then another, full on her lips.

She melts under the strength of that kiss, as Dominic pushes his tongue into her mouth, claiming it for himself. He tastes of the sparkling wine they’ve been drinking, and along with sandalwood, his cologne carries a faint aroma of pipe tobacco and leather, how she imagines the interior of an old-fashioned gentlemen’s club to be.

Saskia brings her fingers up to tangle in Dominic’s hair, pulling his lips even more firmly on to hers. When they finally break apart, she’s breathless and wildly excited.

“You really know how to kiss a girl,” she comments. It’s not flattery, just the truth. With Dominic, there’s no awkward bumping of noses or clashing of teeth; none of those awful, slobbery, over-eager kisses Saskia dreads.

“That’s not all I know how to do,” Dominic quips. He pushes Saskia’s caramel-coloured curls out of the way so he can nuzzle the sensitive place at the nape of her neck. She loves to be kissed there, and she lets out a little purr of delight as Dominic nibbles at her skin. She kicks off her shoes then draws her legs up on to the bed,
making herself more comfortable.

Almost without her being aware of it, Dominic has unfastened the top two buttons of her blouse. If he glances down, he’ll have a perfect view of the upper curves of her tits, cradled in the saucy bra. Saskia leans back against his chest, allowing him to undo her blouse the rest of the way. She slips a hand down to Dominic’s crotch, where the material of his trousers strains to contain the heft of his erection. When she runs her fingers over the twill-covered bulge, Dominic hisses out a breath.

You can find out more about One Night In Brussels here, and don’t forget there are always plenty of hot Sunday Snogs over at Blissekiss.

The story has more than a dash of romantic suspense, as a simple afternoon’s sightseeing turns into the hottest, most dangerous night of Saskia’s life. Here’s the blurb:

Saskia van Gaal works as a translator for the European Commission, dreaming of a life filled with excitement and hot sex. When she bumps into suave, sexy Englishman, Dominic May, and offers to be his tour guide in the beautiful city of Brussels, she doesn’t realise she’s about to embark on the wildest night of her life.

A stolen necklace is only the beginning of the adventure, and when Dominic and Saskia are threatened by a knife-wielding robber, things threaten to spiral out of control.

Has Saskia misjudged Dominic? Should she trust him? And as their sex games grow hotter and ever more inventive, can she ever guess how this night will end?

The novella is released at the end of September, but it’s currently available for pre-order from retailers including Amazon UK, Amazon US and Smashwords. You can read an excerpt from the story at the Tirgearr site, and I’ll be sharing more snippets and the inspiration for the story nearer the official release date.