The idea of taking a story farther than I ever have before intrigues me.

In Crave, my latest novel from Totally Bound Publishing, I take the plunge.

Many times in my books, my characters will consider collaring a next logical step, a way to express their love, devotion, and commitment to the relationship and to their way of life. I generally end my books before any sort of formality happens.

Honestly, I’ve often thought that a collaring ceremony would be the ultimate act of intimacy between my hero and heroine, and I know that decision would be fraught with ideals, expectations, agreements, promises. This commitment would be every bit as important to them as their wedding.

But what happens when the Dom makes it clear that collaring will be part of the relationship? What if the sub isn’t ready or willing? What happens when a heroine finds a collar in her lover’s dresser drawer?

In the case of Sarah Lovett, she panics. She’s in love with Reece, the man she will likely marry. Though he’s a Dominant, she’d never really thought of him as her Dom. He’s introduced her to the seductive powers of D/s, but she doesn’t consider herself a lifestyler. She isn’t someone who yearns to submit. And when she finds the collar, she realizes he expects it.

Though she’s normally a clear-headed person, Sarah panics. There’s no way she could pass that massive, locking thing off as a necklace. She sees it for what it is, Reece’s desire to show the world that she’s his.

She knows that if she talks to him, confronts him, he’ll manage to reassure her. The man can persuade her to do anything. And if she gives in, he will consume her. Rather than risk giving him the opportunity to convince her to wear it, she runs away. She leaves no contact information. She rejects his calls and ignores his text messages and e-mails.

Sarah begins her life over again, lonely, but determined. She quickly discovers, though, that she does crave dominance, but not just anyone’s. The men she plays with leave her unfulfilled. More and more, her mind is consumed with thoughts of Reece. She dreams of him, wishes she could contact him.

Maybe, she thinks, one last night together would give her the closure she needs and desires. She seeks him out, only to be rebuffed in the same way she’d ignored him.

His rejection only fuels her determination. She enlists the help of one of his best friends, the wildly enigmatic Julien Bonds. Julien can resist almost anything except the compulsion to meddle in the lives of others. He and Reece have been friends since college, and no one knows Reece as well as Julien does. Julien knows Reece still has unresolved angst when it comes to Sarah. So after consuming a fair amount of red wine and making Sarah grovel a bit, he agrees to help out.

But Reece isn’t as happy to see her as she’d hoped.

She’d hurt him more than she’d believed possible, and this new Reece is harder, less trusting. In return for the one night together, he’ll demand more than she’s ever given.

She wonders if she’s strong enough to endure the harshness she helped create. Sarah realizes she’ll have to push herself, challenge her own expectations, express her needs, and be emotionally and physically vulnerable in order to have Reece and the relationship she craves. 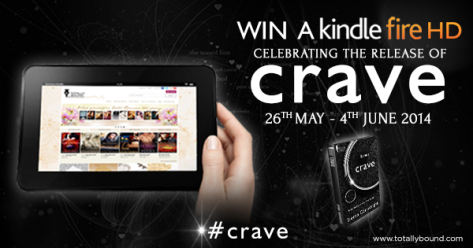 Enter for your chance to win a Kindle Fire HD to celebrate the release of Crave: https://www.totallybound.com/competition/crave-kindle?utm_source=thereallynaughtycorner&utm_medium=blogtour&utm_campaign=crave. The competition runs from May 26th to June 4th, and the winner will be announced at the Facebook release party for Crave on June 4th.