Dreaming of Italian sunshine but know you won’t be travelling any time soon? Well, I can offer you a dreamy Tuscan getaway, complete with a handsome dominant who knows exactly what to do with ropes and the power of his command.

Tamed In Tuscany is part of the Totally Bound/Pride Publishing Rules of Summer collection, featuring steamy BDSM tales set in the hottest months of the year. It’s the story of Isabel, who is sent on a networking retreat by her boss, only to discover one of the other participants in this select event is her former master, Kelvin, who broke her heart when he ended their relationship and returned to New York. Emotions are stirred up, and when Kelvin wants to pick up where he left off, Isabel knows she should say no, but the thought of being under his instruction once more is too much to resist.

Here’s a short excerpt to whet your appetite:

Kelvin took a seat on the bed and reached out to grasp my hand. He pulled me down to sit next to him. “There’s an old Chinese legend which states there is an invisible red thread connecting those who are destined to meet, regardless of time, place or circumstance. And though this thread may stretch or tangle, it will never break.” He stroked his thumb in gentle circles over my palm. “I believe we are joined by that thread, Isabel, and have been since the day we met.”

“It’s a lovely story, but I don’t believe in fate or destiny or whatever you want to call it.”

Kelvin laughed. “Well, it might be I am simply more superstitious than you. Blame my upbringing if you like. I’m sure you still have feelings for me, though, and I intend to prove it.”

“How?” Coming from anyone else, such a casually overconfident statement would have infuriated me. From Kelvin, it was a simple statement of fact, even though I didn’t want to admit it. Part of me yearned to turn my head to his and capture his soft, full lips in a kiss, to sink to my knees at his feet and beg him to master me again. But I’d given in to those yearnings before and it had left me bruised and broken when he’d walked away from our relationship.

“I would like a sign from you that you’re willing to submit to me again. That you feel the tug of the red thread between us, as I believe you do. At dinner tonight, I want you to excuse yourself from the table at exactly eight o’clock, go to the bathroom, remove your underwear, and bring it back to me.”

My eyes went wide and I opened my mouth to respond to his outrageous suggestion, but the words died on my lips. At the thought of carrying out his command, a pulse began to beat hard between my legs. However much I might object, this simple act of submission turned me on.

Kelvin held up a finger. “Don’t say yes or no right now. When eight o’clock comes around, I’ll have my answer. And I should leave you to change. I’ll see you for drinks on the terrace, okay?”

With that, he rose from the bed. Once he had left the room, I picked up my hairbrush and threw it at the door. How dare he stroll back into my life and want to pick up as if the past eight years hadn’t happened? How could he sweep aside all the hurt so easily? Yet there’d been a trace of sadness in his eyes when he’d talked about leaving me, a faint sign of the guilt and remorse I’d always longed for him to express. I’d never seen Kelvin Lim appear as exposed as he had in that moment.

If you want to find out more, Tamed In Tuscany is available to preorder now from https://www.firstforromance.com/book/tamed-in-tuscany. Buona lettura! (That’s happy reading in Italian…)

As well as Cruise Control, the anthology features stories by Ashe Barker, Wendi Zwaduk, Tori Carson, Zoe Mullins and Fara Allegro. You can find out more, and read an extract from the book, here. Hopefully it’ll make you want to choose Sensory Limits, too. 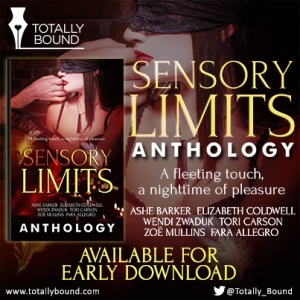 Power Chords is the story of Dax and Jordan, members of chart-topping rock band Code Black, and their love-hate relationship that takes a whole new turn when they’re sent away to write songs for a new album together. More info coming nearer the release date…

Here’s the blurb for the story:

When her dominant husband Greg proposes that they attend a company Halloween gala, Isabella is too excited to be suspicious. Unlike her introverted master, she adores parties and dressing up. Only after they arrive does Bella learn her Dom has planned a kinky, semi-public scene involving both pain and pleasure―a Halloween masque that includes a starring role for Greg’s best friend James.

And here’s a very naughty extract to get you in the mood:

He circled behind me once more to peel off my panties. The soaked cotton clung to my skin. He dragged them down to my ankles and tossed them away.

“Tsk, tsk. It appears that punishment turns you on. Shameful!” Despite his words, he sounded more amused than annoyed. Without prelude, he thrust several fingers deep into my drenched channel. I clamped down reflexively, struggling against the rising tide of pleasure that obliterated every shred of pain.

Greg snatched his hand from my depths, leaving me shuddering with want.

“I should give you additional strokes for that. But that would only arouse you more, wouldn’t it? We’ll have to see if you find a bare-bottomed thrashing equally exciting, you nasty girl.”

The pointer swished through the air. A fireball of pain exploded as it landed on my already tenderized flesh. My howl of agony echoed through the empty museum halls.

“Oh, no, no…! Please, no more, I can’t…” Tears streamed down my cheeks. The latest stripe burned like a brand, the hurt pulsing hotter each instant, even though he didn’t hit me again. Then Greg’s hand cupped my butt cheek. The pain didn’t stop, but his touch transformed the raw feeling into something I wanted. His voice was barely audible above my sniffling.

“You know you can use your safe word, Bella.”

“You could never disappoint me, love.”  He let the pointer rest for a moment across my ass cheeks, then traced a line down the inside of my thigh with the tip.

I spasmed as he brought it closer to my slick, exposed pussy, though, to my mingled relief and regret, he refrained from touching my most sensitive spots. How could I be so aroused when I hurt so much?

Coming In Costume is available from Amazon US, Amazon UK and Smashwords. Go on, let it put the willies up you…

In the mood for a hot snog? Well, I’ve delved into my back catalogue to bring you a snippet from one of my BDSM-themed Totally Bound novellas, Away From It All. Alyssa thinks she’s going to have a boring time on a spa retreat when her best friend has to miss the trip. Then she meets dominant, demanding and very cute film star Drew, and soon she’s having the best sex of her life…

Enjoy the moment, her inner voice told her. Don’t think about what’ll happen when you go your separate ways. He’s the hottest man you’ve ever known and he loves the way you submit to him. Be happy with that.

As if sensing how her thoughts threatened to run away with her, Drew pulled her into his arms. He crushed his mouth against hers in an urgent, bruising kiss. Not caring that someone might come by and see them, she wrapped her arms around his neck, grinding her body against his. Beside them, candle flames flickered, their reflections caught in the surface of the pool, the effect strangely ethereal.

Breaking the kiss, Alyssa panted, “Want you so much. Need you inside me.”

“All in good time, sweetheart.” Drew captured her nipple between thumb and finger, pinching until the pleasure was undercut with sweet pain.

She threw her head back, gasping, pushing her crotch hard at Drew’s still-covered bulge. “Please, Drew. I want to be fucked. I want to come.”

Drew chuckled, but he didn’t keep her waiting any longer. Guiding her out of the water, he picked up their discarded robes and took her over to one of the loungers that lined the side of the pool. Caught up in her need for him, Alyssa no longer cared about being naked. All she wanted was to feel Drew’s cock filling her once more.

Find out just how far Alyssa is willing to go to make all her submissive fantasies come true in Away From It All, and pop over to Blissekiss, home of the Sunday Snog, for all the kisses you’ll need to spice up your weekend…

Hooray for Sunday, and all the delicious snogs coming your way via Blissekiss. As my naughty but nice novella Night Voices is now available for early download from Totally Bound, I thought I’d treat you to a little kiss from that.

Late-night DJ Laurie is less than thrilled about having sex therapist Dr Roxy as his co-presenter, and when she oversteps the mark in the studio, he knows there’s only one way to teach her not to do it again.

Laurie all but dragged her to his flat. The walk had been just long enough for doubts to set in as to whether she was doing the right thing. She’d always been impulsive when it came to men. Until now that had mostly been one-night stands when she was in a strange town on one of her book tours. Hooking up with a man she knew she would never see again had its thrills. Most importantly, it couldn’t do anything to harm her career. But she worked with Laurie, and he could make things very difficult for her if this didn’t work out. If only he hadn’t pushed her buttons with his talk of a spanking.

Maybe she should have tried harder to resist the challenge he’d laid down. Who was she kidding? Resistance was the last thing on her mind, especially now, as Laurie fumbled his key into the front door lock and let them both into the flat. Still, she needed to be sure they were both reading from the same script.

Rising up on her toes, Roxy took the point of Laurie’s chin in her hand and held it there while she pressed her lips to his. He made no attempt to break free of her grasp, returning the kiss with passion. They staggered a couple of paces down the hallway, mouths locked together. Laurie traced his tongue over Roxy’s full lower lip, and she moaned softly. She played her hand down the length of his throat and into the open neck of his shirt. The soft curls of hair tickled her fingertips, and she smiled to herself. She loved a man with a nice, hairy chest—even better if that hair trailed in a line to connect with the bush at his groin and drew the eye downwards with the promise of delights to come.

Roxy started to tug at his shirt buttons, wrenching the first two open before he stopped her.

“Hey, who’s in charge here?” he growled. “Not the little brat who needs a spanking, that’s for sure.”

She’d never been referred to as a brat before and the word, with all its connotations of bad behavior that needed to be punished, sent a shiver of dark, sweet pleasure through her.

“Come with me,” Laurie ordered and led her through to his living room.

To find out more, pick up a copy of Night Voices from Totally Bound. And visit Blissekiss for more lovely snogs.